I have the render from temporary file option turned off, so that is not it.

Look here. All directories with ".hiplc" are created by Afanasy. The other are creatd by Houdini/Redshift: 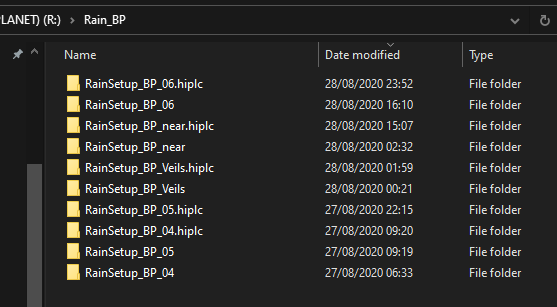 Hi.
Afanasy checks images output folder for existence on submit, and when it does not exist, it tries to create it.
There can be some cases, when this check is not needed, when Afanasy can't find out correct output folder, when you using takes for folder and so on.
You can disable this feature too.
Uncheck "Check Output Folder" checkbox.
Timur Hairulin
CGRU 3.0.0, Ubuntu 18.04 LTS, MS Windows 10 (clients only).
Top

It seems that I don't understand you.
Afanasy does not deal with file extensions and $HIPNAME variable.
It just can check vm_picture folder for existence, and create it. And can save scene to temp file to render.
So I do not understand what is going on.
If you want, you can describe all your and Afanasy movements step-by-step.
Timur Hairulin
CGRU 3.0.0, Ubuntu 18.04 LTS, MS Windows 10 (clients only).
Top

I have checked everything.
Not submission script, but script that renders sets HIP and HIPNAME variables!
https://github.com/CGRU/cgru/blob/maste ... _af.py#L57

I will check this code!
Most probably it is obsolete and do not needed.
Timur Hairulin
CGRU 3.0.0, Ubuntu 18.04 LTS, MS Windows 10 (clients only).
Top

Can we return to the question about to bake HIP variable in the command or in environment?
This way, on submit temporary scene will be rendered, artists can continue changing original scene, but caches and images will use original HIPNAME.
Timur Hairulin
CGRU 3.0.0, Ubuntu 18.04 LTS, MS Windows 10 (clients only).
Top
Post Reply
16 posts